The Isha Foundation and spiritual leader Jaggi Vasudev received the full support of Karnataka’s ruling BJP on Sunday, January 15, in their efforts to make their centre in the Chikkaballapur area a popular travel destination for devotees from around the world. After dedicating the 112-foot-tall Adiyogi monument in Avalagurki in Chikkaballapur, around 70 kilometres from Bengaluru, the chief minister Basavaraj Bommai declared that the area will experience all-around growth.

“Activities that promote our culture will be supported by our government. Conflict exists in the nation. Adiyogi is essential to keep everything in balance. The state will receive the blessings of the Sadguru. Karnataka as a whole will develop. There is a power at work here, “CM Bommai Said. 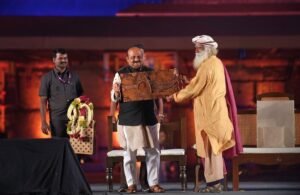 In his speech, Sadhguru emphasised the importance of sanctified areas for individuals looking to rise above the ordinary. Instead of catering to people who only look up to something, he stated, “creating powerful spaces for transformation and transcendence is to cater to those who wish to rise… (but for) those who intend to rise above the commonplace and touch the magical part of life and its source.”

Contents
What is the Entry fee to visit the Temple?What is the Timing of the Temple?How far the temple is from all around Bengaluru?What are the Guidelines?Guidelines to be followed on premises:

Jaggi Vasudev announced that Chikkaballapur would become a popular tourist attraction. People from all over the world will travel here in search of ecstasy and enthusiasm as well as to learn about powerful ways to live, he predicted. He recalled his mother visiting the hill where she received her initiation when she was 11 years old when speaking about his youth in Chikkaballapur. He claimed that although she practised yoga, she kept it a secret. I was attracted here.

At the occasion, Health Minister Sudhakar released Sadhguru’s book Adiyogi – the Source of Yoga in Kannada.

A 14-minute light and sound spectacle that was projected onto the statue of Adiyogi was presented after it was unveiled. Beginning January 15, the ‘Adiyogi Divya Darshanam’ performance will be shown every evening, according to a statement from the Isha Foundation.

What is the Entry fee to visit the Temple?

The organization and makers have decided that there will be no fee to watch God’s face, it is completely free for all devotees (Covid-19 norms will be allowed.)

What is the Timing of the Temple?

Adiyogi Shiva statuee and Yogeswara Linga Mandir are open on all days of the week from 6 AM to 8 PM.

How far the temple is from all around Bengaluru?

What are the Guidelines?

Guidelines to be followed on premises:

Medical screening including temperature check will be done for all visitors. Premises will be sanitized every 3 hours

Students are taking my test and I enjoy it: PM Modi

Man marries daughter-in-law in UP

Republic Day: Majority of the tableaux based on Women Empowerment