Una/Chamba, Oct 13 (UiTV/IANS) – Prime Minister Narendra Modi during day-long visit of Himachal Pradesh on Thursday flagged off high-speed luxury fourth Vande Bharat Express and laid the foundation stones of Bulk Drug Park that will attract investment of around Rs 10,000 crore and provide employment to more than 20,000 people from Una town.

This is the Prime Minister’s ninth visit to the state in the five years and second in almost a week.

He also inaugurated the Rs 128 crore Indian Institute of Information Technology (IIIT) set up in Una well ahead of the Assembly polls in the BJP-ruled state.

Chief Minister Jairam Thakur, who is leading the party’s election campaign that has gained momentum, said this is the ninth visit of the Prime Minister which reflects his bonding with the state and its people.

He said Congress leaders were baffled due to the visits of the Prime Minister, as they knew the Congress would be completely wiped out from the state in the coming Assembly elections.

With the launch of the Vande Bharat Express service, the travel time between Delhi and Chandigarh would be brought down to three hours from October 19. It will run six days in a week, except Friday.

The Prime Minister’s clarion call for Aatmanirbhar Bharat or self-reliant India has led to the country moving swiftly towards attainment of self-reliance across multiple sectors, through support of various new initiatives of the government.

One such key sector is pharmaceuticals, and in order to bring in Aatmanirbharta in this sector the Prime Minister will lay the foundation stone of Bulk Drug Park at Haroli to be built at a cost of Rs 1,923 crore.

The park will help reduce dependence on active pharmaceutical ingredients (APIs) or pharmaceutical raw material imports. It is expected to attract investment of around Rs 10,000 crore and provide employment to more than 20,000 people. It will also give a fillip to economic activities in the region.

The foundation stone of the Indian Institute of Information Technology (IIIT) Una was laid by the Prime Minister in 2017. Currently, more than 530 students are pursuing study in the institute.

Running from Amb Andaura to New Delhi, the inaugural run of Vande Bharat Express will be the fourth Vande Bharat train to be introduced in the country and is an advanced version compared to the earlier ones, being much lighter and capable of reaching higher speed in shorter duration.

It accelerates to 100 km per hour in just 52 seconds. The introduction of the train will help boost tourism in the region and provide a comfortable and faster mode of travel.

Both these projects will generate over 270 million units of electricity annually and Himachal Pradesh is expected to get annual revenue of around Rs 110 crore from these projects.

Prime Minister Modi will also launch Pradhan Mantri Gram Sadak Yojana (PMGSY)-III in Himachal Pradesh for upgradation of around 3,125 km of roads in the state.

More than Rs 420 crore has been sanctioned by the Central government under this phase for the upgradation of 440 km of roads in 15 border and far-flung blocks of the state.

Commuters of neighbouring Haryana will also get benefitted from the Vande Bharat Express train.

Responding to the start of the train, Haryana Chief Minister Manohar Lal Khattar said the new train running between Una to Delhi will greatly benefit the people of Punjab and Himachal as well as Haryana.

The people of the state, who travel to Delhi or other cities for work, will be greatly benefitted from this train, he said.

After the flag off, the train will leave Una at 9.30 a.m. and will reach New Delhi at 3.30 a.m. via Sri Anandpur Sahib, Chandigarh and Ambala.

At the public meeting in Bilaspur town after inaugurating the development works, Modi stressed that in the last eight years, there was a new thought process.

“The double engine government has given the state new infrastructure in every step,” he had said in the mass public address.

The Election Commission, which just concluded its three-day visit to the state, is likely to announce the election schedule in the next few days.

The BJP in the 2019 Lok Sabha elections had won all the four seats that saw 72.25 per cent polling. 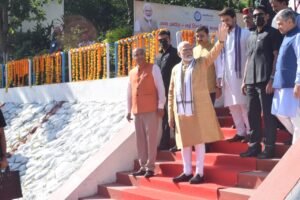 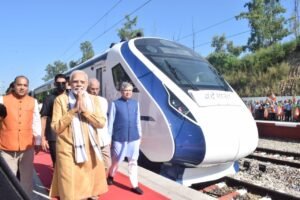 Students are taking my test and I enjoy it: PM Modi

Man marries daughter-in-law in UP